The Town of Shannon has a rich and colorful history dating back to the early 1800’s.

Samuel Shannon built a log cabin on his land that he had purchased from Chickasaw Chief Itawamba and began the work of developing a farm. The big surge of settlers came after the Treaty of Pontotoc.

Soon Samuel Shannon had plenty of neighbors. By 1839 there were enough of them to organize a church. Cumberland Presbyterian Church known as the Pine Springs Church was established about two miles west of Shannon on the property known as the Penney Place. The location of a church at this spot, which at that time was in Pontotoc County, seems to indicate the central point of the settlement. There is an old cemetery with graves dating back to the 1830’s.

The first site of the Shannon settlement was just north of the present day park. A post office was established and was given the name Shannon.

Samuel Shannon died in 1851, never getting to see the town named after him reach its full potential.

In the late 1850’s a new railroad was projected through Mississippi--the Mobile and Ohio. It passed the site of the old Shannon settlement just past the little country post office. In a deed dating March 13, 1860, it shows Gilbreath Simonton selling land to the Mobile and Ohio Railroad for the purpose of building the Railway Station.

The old downtown part of Shannon was built on land owned by two bachelor brothers, the late George and Ed Shannon, sons of founder Samuel Shannon. Soon people were flocking to the railroad and the new little town was born.

Merchants began opening doors while churches and houses were built.

Gilbreath Simonton drew out a map which laid out town lots. His map showed many numbered lots and streets and who owned property. It was Gilbreath Simonton who named the town Shannon after its founder Samuel Shannon.

In 1859 John Simonton was elected to the state senate from Itawamba County. When the War Between the States broke out, he left his business for military duty and resigned his seat in the Senate. On September 10, 1861 John Simonton was commissioned “Colonel“, hence the title Colonel Simonton. He went back to the Mississippi legislature to serve Shannon many years while representing Monroe, Itawamba and Lee counties. It was in 1866 when Simonton introduced the bill in the Mississippi legislature creating the new county of Lee which was cut out of portions of Itawamba and Pontotoc Counties. He was also State Land Commissioner. In 1871 he deeded to the trustees of the Shannon Methodist Church a one-half acre lot for the purpose of a church building.

Shannon in its early history set apart a plot of land east of the M&O Railroad to be used as a burying place for their dead. Many graves of early residents are to be found here and many memories can be revived by a visit to this cemetery.

The pioneers who settled around Shannon were cultured people. They brought with them from the older states the fine cultures of Virginia, the Carolinas, Georgia, and Tennessee and transplanted them upon that little row of hills that lie between the valleys of Chiwappa and Coonewah.

At one time Shannon was known of having quite of few aspiring artists.

At one time they were three cotton gins, corn elevator and a grain elevator in operation here.

Sadly only remnants remain of what once was the bustling downtown.

There are only a few original buildings left in the old part of town.

One of them is the old Francis store, now owned by the Town of Shannon

It has been remodeled and now serves as a restaurant. 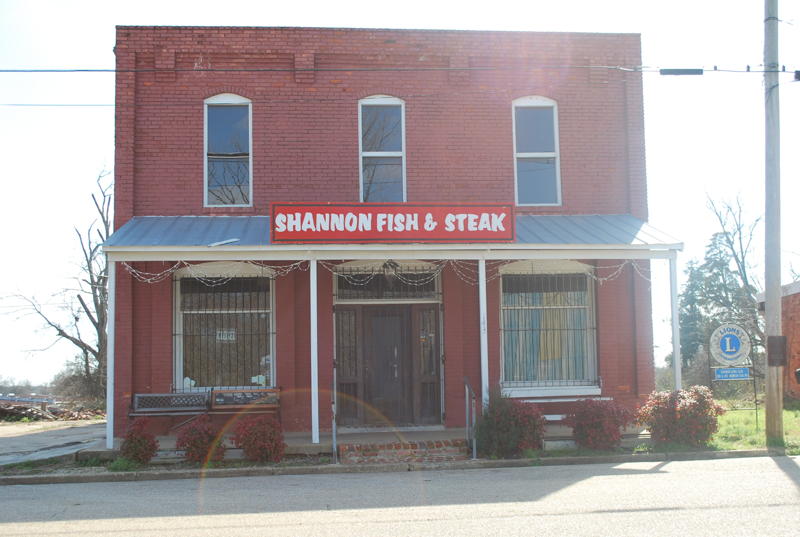