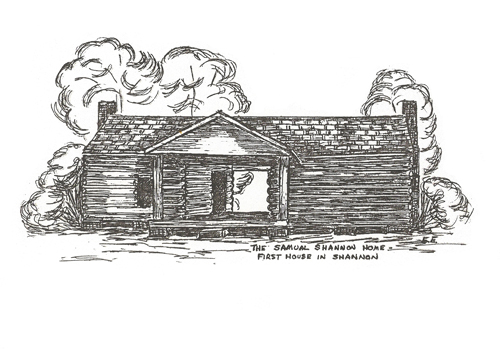 Beautiful names of streams and places are all about the Indians imprinted on civilization in this area. Among these tribes were the Chickasaws and Choctaws who migrated to Mississippi from the west. Tradition has it that they came on their long trek under the leadership of two brothers “Chatah (Choctaw) and Chiaksah (Chickasaw) founders of the tribes which even today bear their names. Northeast Mississippi has always been spoken of as belonging to the Chickasaw nation, the Choctaw settled in south Mississippi.

On October 24, 1801 the Indians signed a treaty to permit the U.S. government to lay out an open road which would eventually become known as the Natchez Trace .In about 1836 a young Irishman named Samuel Shannon and his family migrated to this area Shannon was an astute trader most famous being a horse trader, collecting large herds of Indian ponies and horses which he traded to the Indians over the country extending from Illinois southward. Also he was destined to make a memorable deal with Levi Colbert whose Indian name was Itawamba and later became known as Major Levi Colbert. Chief Itawamba lived in a wigwam in a large sassafras grove at what is now called the old Shannon homeplace. Adjacent to the grove was a valuable deer lick where deer congregated when hungry for salt.

Samuel Shannon upon seeing Chiwappa and Coonewah bottoms, was especially impressed with the cane that grew luxuriously green all winter. Shannon made a deal with Chief Itawamba whereby he (Shannon) traded a large herd of horses for a tract of land which was comprised of parts of the Coonewah, Chiwappa, King, and Town Creek bottoms. What stood as a landmark for years in Shannon was the large log house which Samuel Shannon built for his home on the very site of Itawamba’s wigwam. It is indeed rare when a place can be pointed out and it can be said of it. “This is the spot where the Indian set up his wigwam and where he lived when he traded the land to the white man. And on this same spot the white man raised his log house”